An honest critique of Bitcoin money.

Bitcoin is getting a lot of deserved attention. The technology is outstanding. However, it has deep philosophical flaws which prevent it from serving the “have-nots”.

1. Only the elite can ISSUE Bitcoin. Only the elite who have powerful, mega-computers can mine Bitcoin. This is similar to gold and silver commodity money. They are wonderful to have, if you are already wealthy enough to own them. Everyone else must trade their Federal Reserve Notes or time and products to get them.

Better: Barter is free and available everyone. Additionally, any business owner can issue a gift certificate for free which is money. Humanity needs a system where the “have-nots” can issue money.

2. Machines are the basis for the value which backs Bitcoin. Our existing system already places little value on human beings.

3. Bitcoin is built for speculation just like gold and silver. Bitcoin owners hoard it waiting for price to go up. Once people hoard a currency it fails to act as a currency which must flow.

Better: Money is a contract not a commodity. A restaurant gift certificate isn’t the value; the food is the value. The gift certificate just makes barter easier. The flow of trade is maximized when currency flows.

Better: Hour Money stays fixed in value like an inch. This protects from inflation and deflation.

5. Bitcoins are deliberately kept scarce. The entire basis of their value is that they are rare. However, Federal Reserve Notes are already scarce. Humanity needs abundant money in order to have abundance.

Did you know that bankers loan money that was invented with YOUR signature?

When we “borrow money” from the bankers the money the “loaned” is invented when we sign the promissory note. The money does not exist until it’s invented with our signature. The bankers then charge us interest despite risking nothing. This occurs with credit cards, car and home loans. And most types of business loans too.

Please watch this video for documentation directly from the bankers themselves.

What’s the difference between Greed and Usury?

This was a very popular meme on Facebook recently. Some of the most common responses where hate, greed and usury. Usury was named the most particularly by the monetary reform crowd. It’s an excellent question to really get people thinking. What you’re really asking is: what is the root cause evil on planet earth? Why are our institutions failing despite all the technology?

Many came to chose greed as the root cause problem, but in reality it is usury.

What’s the difference between greed and usury?

Greed, lust, gluttony, sloth, envy, revenge and pride are the 7 deadly sins. They exist with or without money. When we are faced with scarcity of food; some might be greedy and hoard far more than they can eat while others starve. These are all part of the human condition which we cannot eliminate. We can create an environment where their impact is minimized.

“The love of money is the root of all evil”. Usury is the “love of money” over our Brothers and Sisters. Usury is the monopoly/privatization of humanity’s barter system. Once that system is hijacked by the usurers all of our other institutions become usurped. Individual greed is a minor problem. However, when psychopaths war on humanity through the money systems we are faced with extinction.

Usury money is kept scarce for the “have-nots” so that they sell they souls to do their bidding of the elite. Meanwhile we circle the drain while the financial elite live in opulence. Worse, usury/interest/riba create un-payble contracts where it’s impossible for all to pay their debts. One cannot pay P+I when only P is circulated. We default and the usurers confiscate all land over time. All this can occur with or without government and the Federal Reserve.

Some also say they wish to eliminate all money period. However, money is simply technology which innovates barter. Any technology can be used for good or evil. Think of a TV. It can be used to control minds or emancipate them. Hour Money is barter scrip which eliminates force, fraud(usury) and monopoly over this essential social contract.

This was the question posed to activists at a Denver End the Fed protest.

The People get a victory* over the banksters!

The People get a victory* over the banksters!

“Usury(love of money) is the root of all evil” Fortunately the usuryFree monetary reform revolution has started.

“Truth seekers” please watch this as you’ll see some of our progress. Outstanding coverage by Gary Franchi/N3. The private bankster(mall cops) run a false flag against Bruce Baumann/We Are Change Colorado and get caught red handed. The bank mercenaries purge themselves despite video documentation of their fabrications.

We don’t accept the dominant culture’s dystopian future of Zombie Apocalypse. The bunker, bombs, FRN’s/gold/silver, police state and fear paradigm are losers. Truth and Love are the path. The Love Revolution requires a Love Currency:

HourMoney.net = “the Love Currency” = Get paid in the vocation of your passion in a 15-20 week work year. Force and fraud eliminated from the social, political and judicial systems. And MORE funding for social programs. This is the potential the usuryFree Jubilee movement.

This is the Achilles Heal to the banksters oligarch.

*The People paid for the fines not the individuals perpetrating the crimes. The private bank security officials were not held accountable nor was the institution which hired them. The banksters just invent the money and steal our commercial energy to back their paper. That’s why we need to issue our own money and let the bankers, politicians, athletes, entertainers and talking heads truly earn our money. “Time to flip pyramids”!

“Change the money, change the world!”

PS: And we can fix the Fukushima mess which is the greatest mortal threat facing humanity.

Interest is NOT sustainable.

Interest is NOT sustainable. If your favorite monetary reform system doesn’t eliminate interest, then it’s un-sustainable too.

The banksters can control societies on gold, silver, paper or digital money creation and lending. They can create perpetual debt with big government, small government or even no government. All they require is usury/interest/riba. Therefore, to protect their vigorish they finance monetary reform solutions which blame paper and digital money. Or they blame force of government alone. Or they blame the Federal Reserve alone.

However, interest/usury/riba must be eliminated in order for money to serve humanity. We must eliminate: force, fraud(usury) AND monopoly of money or social contracts. Exponentially growing debt fueled by interest cannot be repaid by all borrowers.

lol! "It's the interest stupid!"

Why is it called Hour Money?

1. Time is the only commodity which the “have-nots” possess. “Time is money”

2. The “have-nots” issue it directly without permission from government or private bank corporations.

3. It’s signed by YOU and backed by your “soul power”, products and services.

4. Organic money is THE bottom up, grass roots solution to centralized, bankster globalism.

6. It’s the Love Currency because more can be employed in the vocation of their passion and gifts.

The ONLY revolution is usuryFree monetary reform. Focus to win.

Nothing will change until we change the money. The banksters finance political theater so that we are divided and conquered with non-solutions lead by “false leaders”.

Why Monetary Reform MUST become YOUR #1 Issue.

Scarcity of money is an engineered deception by private bankers. A restaurant or grocery store creates new money any time they issue gift certificates or coupons. In order to issue more money all we must do is create more value. Value is the limiting factor NOT money.

What’s the MOST valuable thing humanity could do for itself?

2. Clean-up Fukushima. A networked Hour Money based international system will clean up Fukushima and more. Meanwhile, cure un-employment. “This Generation”s Greatest Cause”. Checkout John “the monetary engineer” Turmel’s plan to save humanity from its greatest mortal threat.

The banksters’ work at Walmart to you drop program. 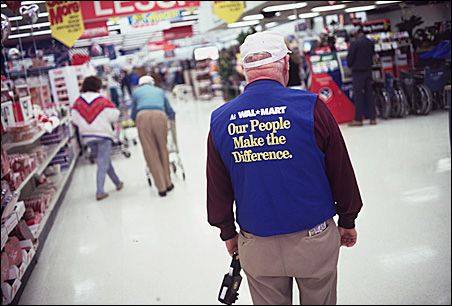 The United States is a private bank colony. Just like the rest of the planet. We are debt slaves working for banksters. Each bank colony is slowly destroying the standard of living of its subjects.

The banksters are pushing puppet politicians to raise the Social Security retirement age to 70. Working at Walmart until you drop is the future for many people.

ONLY monetary reform is going to solve this. They need us. We will be much more healthy without them.

“Change the money; change the world”

The corollary to that: “Don’t change the money….work at Walmart until you drop”

Using your Tribe’s own money is Kryptonite to the banksters control.